Buying a property in Box Hill Box Hill North & Box Hill South can be a difficult process that many of us only undertake a few times in our lives.A Buyers Advocate or Buyers agent can assist for a variety of reasons including:

Getting your weekends back by applying our wise experience in finding your perfect home in Box Hill Box, Hill North & Box Hill South.

This name was selected at a meeting of residents in 1861. Box Hill was chosen because of the large number of yellow box trees growing among local forest.

Box Hill is a bustling multicultural hub with a thriving central market and big development plans for the future, situated 15 kilometres east of the city.

Centred around Whitehorse Road and Station Street, Box Hill is home to an energetic Asian community and an incredible range of restaurants, renowned across the city.

Box Hill has a very spirited vibe with something for everyone, including young, independent singles, couples and is also very popular with older independent individuals and even families.

Box Hill Town Hall hosts everything from art exhibitions to Japanese food festivals; Aqualink is a sporting epicentre; and, during Chinese New Year, Carrington Street explodes in a festival of fireworks and fun.

Transport is super convenient with trams, a major bus network and a busy train station built under the shopping centre. It’s also a quick, straight drive into the city, with good access to the Eastern Freeway. There are also a number of schools and medical facilities in the area.

Box Hill has a lot of Deco and period homes, particularly from the 30s and 40s in its side streets, but the main roads are becoming home to some impressively designed, contemporary apartment complexes. Multiple high-density, highly modernist apartment developments are also emerging in the area. 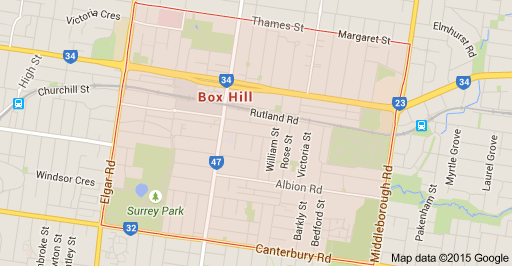 Selling your home in Box Hill? Speak to a Vendor Advocate First.