Buying a property in Cremorne can be a difficult process that many of us only undertake a few times in our lives. A Buyers Advocate or Buyers agent can assist for a variety of reasons including:

Getting your weekends back by applying our wise experience in finding your perfect home in Cremorne. We can help you purchase a home with confidence as we guide you through each step from selecting the home (access to off market listings), market appraisal, negotiate or bid at auctions.

Cremorne is a small inner suburb of Melbourne, bounded by the Yarra River, Punt Road, Swan and Church Streets, and divided down the middle by the railway to South Yarra. Covering only about a square kilometre, until 1999 Cremorne existed only as a locality in the larger suburb of Richmond. Cremorne’s charm is in its rather chaotic mix of uses and the unique character resulting from being ‘walled in’ by main roads and railways on all sides.

Cremorne takes its name from the Cremorne Gardens, an amusement park which occupied a riverfront location in the western half of Cremorne for a period in the mid 19th century.

There are industrial icons such as Bryant and May and Rosella factories, and the Nylex Clock, side by side with Victorian cottages, modern townhouses, offices and light industries.

Swan Street is one of Melbourne’s most popular shopping strips. Once famous for the Dimmeys department store, full of discounted seconds and distressed stock, which is now being redeveloped as an apartment complex, it also has an eclectic collection of restaurants and clearance shops. The street also features some fine examples of Edwardian and Victorian architecture. A period of renewal since the early 2000s has seen an influx of cafes and restaurants as well as modern residential apartment development along the strip.

Punt Road is the major north–south link in inner Melbourne and is busy 24 hours a day. Church Street is lined with furniture showrooms. 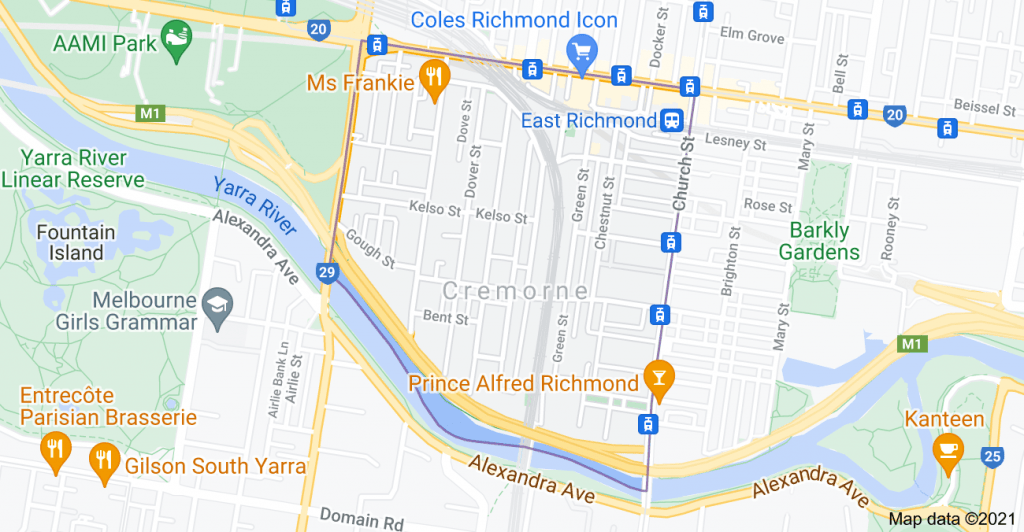