Buying a property in Middle Park can be a difficult process that many of us only undertake a few times in our lives. A Buyers Advocate or Buyers agent can assist for a variety of reasons including:

Getting your weekends back by applying our wise experience in finding your perfect home in Middle Park. We can help you purchase a home with confidence as we guide you through each step from selecting the home (access to off market listings), market appraisal, negotiate or bid at auctions.

Middle Park is an inner suburb of Melbourne, 5 km south of Melbourne’s Central Business District. Its local government area is the City of Port Phillip. It is located between Port Phillip and Albert Park Lake, which is about halfway across the western side of the Albert Park Reserve (a state park), hence the name “Middle” Park. Middle Park, along with neighbouring Albert Park, contains some of the best preserved terrace house and Victorian architecture in Melbourne and is part of a strict heritage-conservation area.

The fine old buildings and development restrictions in the area and new developments are generally sympathetic to the prevailing style, driving up real-estate prices dramatically, in marked contrast with neighbouring St Kilda.

Middle Park are host to some of the finest 1930s and 1940s architecture in Melbourne, with pretty attached and row housing lining its leafy streets and rose-adorned parks, much dating back to Victorian and Edwardian eras, such as magnificent terraces of St Vincent’s Place. 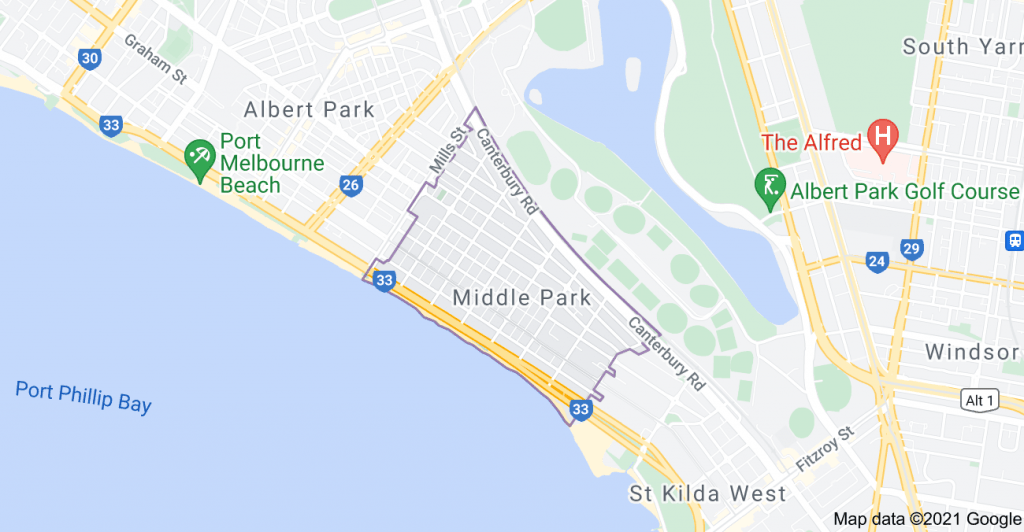