Buying a property in Viewbank can be a difficult process that many of us only undertake a few times in our lives. A Buyers Advocate or Buyers agent can assist for a variety of reasons including:

Getting your weekends back by applying our wise experience in finding your perfect home in Viewbank. We can help you purchase a home with confidence as we guide you through each step from selecting the home (access to off market listings), market appraisal, negotiate or bid at auctions.

The Yarra River and large tracts of the Yarra Valley Parkland run along one border of Viewbank. The Plenty River forms Viewbank’s eastern boundary, whilst its northern boundary is defined by Lower Plenty Road (a main road linking Heidelberg and Eltham). Although mainly a residential area, there is a small commercial strip on Martins Lane adjacent to Viewbank Primary School.

Remnants of Viewbank’s farming past can be seen from the historic silos still standing on Banyule Road. The site is recognised as having historical and archaeological significance to the State of Victoria, and is listed on the Victorian Heritage Database.

The area was primarily developed around the 1960s. Viewbank Post Office opened on 1 October 1962 and was renamed Banyule in 1969.

Several new housing developments were built during the 1990s and 2000s, including the end of Martins Lane, Winston Hills and Eagle View (on Casey Crescent).

Banyule Flats encompasses a large wetland of over 46 acres and is considered the largest grassy woodland in inner Melbourne. 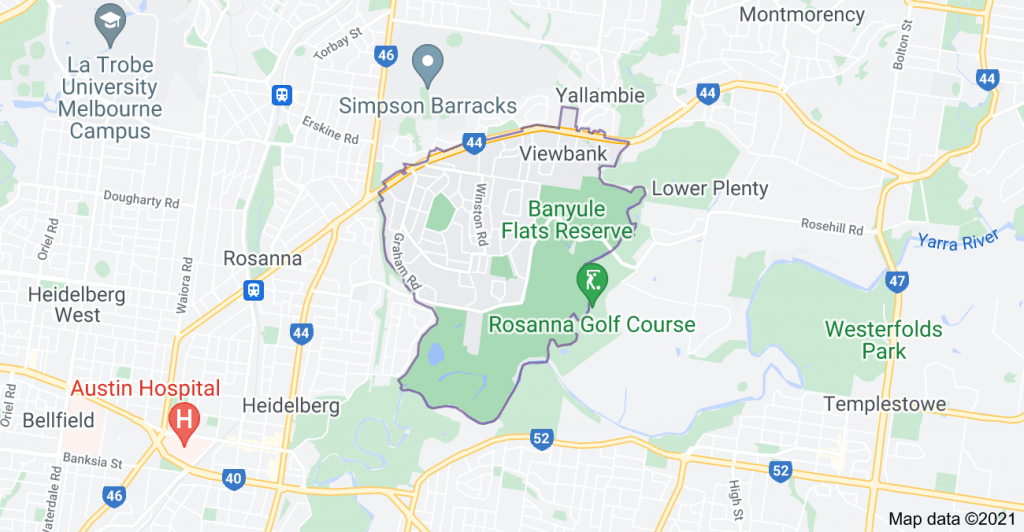