Buying a property in Alphington can be a difficult process that many of us only undertake a few times in our lives. A Buyers Advocate or Buyers agent can assist for a variety of reasons including:

Getting your weekends back by applying our wise experience in finding your perfect home in Alphington. We can help you purchase a home with confidence as we guide you through each step from selecting the home (access to off market listings), market appraisal, negotiate or bid at auctions.

The name Alphington was derived by Sir William Manning, after a town Alphington in Devon, England, which was his birthplace in 1811.

Alphington is located 7 km north-east of Melbourne’s CBD with tracts of green open space, such as the Darebin Parklands and Alphington Park. The suburb is serviced by the Alphington railway station, on the Hurstbridge railway line, and the Melbourne 508, 546, and 609 bus routes.

Other transportation options include the Chandler Highway runs from Heidelberg Road in Alphington, across a new six-lane bridge over the Yarra River. Its total length is less than 2 kilometres, leading to its claim as “the shortest highway in the world”.

Bounded by the Yarra River and Darebin Creek, Alphington boasts lots of green spaces as well as a golf club, senior and junior football clubs, wetlands, a bicycle path, three local schools and an enterprise centre. A railway station sits within the area and links it with the CBD and neighbouring towns, including Thornbury, Ivanhoe, Kew East, Fairfield and Kew. 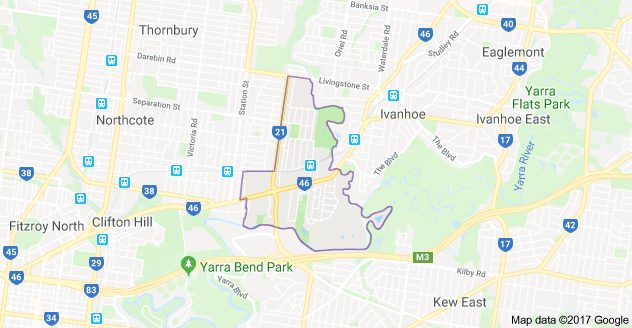 Is it a good idea to buy property in a recession?