Buying a property in Hughesdale can be a difficult process that many of us only undertake a few times in our lives. A Buyers Advocate or Buyers agent can assist for a variety of reasons including:

Getting your weekends back by applying our wise experience in finding your perfect home in Hughesdale. We can help you purchase a home with confidence as we guide you through each step from selecting the home (access to off market listings), market appraisal, negotiate or bid at auctions.

Hughesdale began, not as a Melbourne suburb, but as a suburban area of Oakleigh along the railway line between it and Murrumbeena. Just 2sq km in size, it is the smallest suburb in the City of Monash. Hughesdale is bordered by Poath Road to the west, Dandenong Road to the north, Warrigal Road to the east and North Road to the south.

Following the opening of railway station on 28 February 1925 the suburb boomed with a commercial area rapidly springing up near the station along Poath Road and subdivision of sparse land between Murrumbeena and Oakleigh for residential development.

Rapid industrialisation and expansion of both Melbourne and Oakleigh in the 1940s saw Hughesdale become entrenched as a Melbourne suburb and commuter zone. Hughesdale inherited the modified grid plan of neighbouring suburbs and the original Victorian era estates were converted to greenfield land eventually making way for affordable working class housing developments.

Many street names in the suburb were named after notable British train stations.

Hughesdale is primarily a residential suburb. The majority of the housing stock is detached. All original housing was either detached or semi-detached. Since the 1960s there has been some development of walk-up two-storey flats and flats in specific areas. More recently apartments in taller buildings around the railway station have increased in popularity. 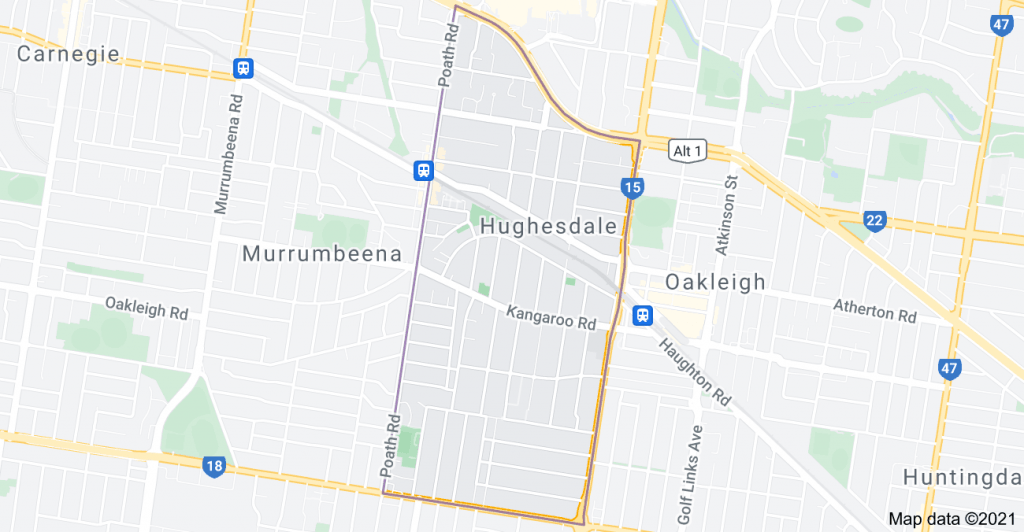