Buying a property in St Kilda can be a difficult process that many of us only undertake a few times in our lives. A Buyers Advocate or Buyers agent can assist for a variety of reasons including:

Getting your weekends back by applying our wise experience in finding your perfect home in St Kilda. We can help you purchase a home with confidence as we guide you through each step from selecting the home (access to off market listings), market appraisal, negotiate or bid at auctions.

St Kilda was proclaimed a municipal district in 1855, a borough in 1863 and a city in 1890. The Aboriginal name for the locality was Euro Goroke, referring to a local stone used to sharpen weapons. Initially called Fareham in 1842, the locality was officially named St Kilda by Lieutenant Governor Charles La Trobe after the small vessel Lady of St Kilda, which in turn was named after an island off Scotland.

St Kilda is a south eastern suburb of Melbourne, Victoria, Australia, 6 km south-east of Melbourne’s Central Business District. Its local government area is the City of Port Phillip. At the 2011 Census, St Kilda had a population of 17,795.

St Kilda is an inner southern suburb of Melbourne, located on a sandy stretch of Port Phillip between Albert Park and Elwood. Originally a seaside resort in Melbourne’s early years due to its close proximity to the city centre, St Kilda has developed into a trendy and cosmopolitan suburb. St Kilda is famous for its food, entertainment and nightlife. Acland Street is a bustling shopping precinct famous for its cafes, continental cake shops, fashion and second-hand shops. Nearby Fitzroy Street is renowned for its restaurants, hotels and bars. 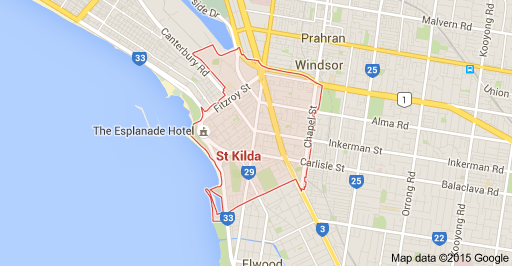