Buying a property in Armadale can be a difficult process that many of us only undertake a few times in our lives. A Buyers Advocate or Buyers agent can assist for a variety of reasons including:

Getting your weekends back by applying our wise experience in finding your perfect home in Armadale. We can help you purchase a home with confidence as we guide you through each step from selecting the home (access to off market listings), market appraisal, negotiate or bid at auctions.

Armadale comes from “Armadale House”. This was the residence of politician and real estate agent James Munro. He named “Armadale House” after the Scottish village where he went to school.

Armadale is regarded as Melbourne’s top suburb, is considered one of Melbourne’s premier blue-chip areas, located only 7km south-east of the city.

The suburb is convenient and an attractive location which makes it a popular choice for younger people living an independent lifestyle. But it’s also a very established suburb and you’ll find many long-time locals living here too, either as a family or as empty nesters.

The highly prestigious, well-established inner-city suburb status has its architecture reflect that. Along Kooyong Road and its offshoots, impressive historic mansions and immaculate period homes can be seen. Compact terrace-style houses on the other side of High Street, as well as some mid-century flats, while contemporary apartment complexes are appearing on the main roads as well.

Armadale contains and is in close proximity to a number of Melbourne’s leading private schools, including Lauriston Girls’ School and the King David School. It also contains a number of parks, including Toorak Park, Victory Square Reserve, Armadale Reserve and the Union Street Gardens.

The suburb has its own railway station, as well as Toorak railway station, which is also in Armadale, both located only less than 1km away from each other with 3 tram lines, making transportation extremely convenient. 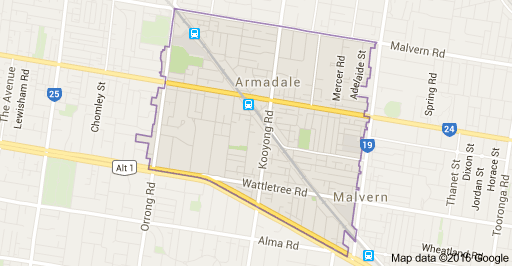