Buying a property in Hawthorn can be a difficult process that many of us only undertake a few times in our lives. Buyers Advocate or Buyers agent can assist for a variety of reasons including:

Getting your weekends back by applying our wise experience in finding your perfect home in Hawthorn.

The name “Hawthorn” was, for a time, written with a final “e”. It is reportedly named after Lieutenant Hawthorne of the Frigate Phantom or the Frigate Electra, which visited the port between 1852 and 1854. Hawthorn had been a municipality since 1860 and a city since 1890.

Hawthorn is a suburb in located in The Eastern Suburbs of Melbourne, 6 kilometres east of Melbourne’s central business district. Its local government area is the City of Boroondara. Hawthorn population: 21,177.

The suburb’s history is written over its many boom-style Italianate mansions, which mix with humble Victorian worker’s cottages and Edwardian family homes.

Shoppers and diners are spoilt for choice, whether it’s in the quaint Auburn village, buzzy Glenferrie Road, or the busy intersection of Burwood and Denmark Roads. Specialty shops, supermarkets and home-decorating outlets are interspersed with cafes, restaurants and bars.

Although well-served for public transport, walkers and cyclists might prefer the green tracks along the Yarra River for travelling the 6km to or away from the CBD 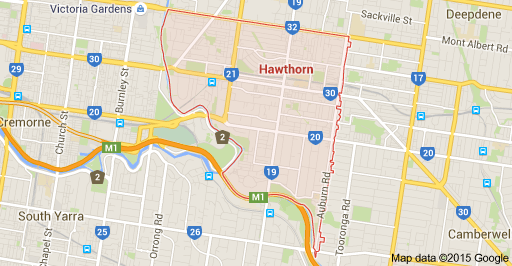 Homes: period homes – some Deco, some weatherboard, many renovated with heritage gardens.