Buying a property in Bundoora can be a difficult process that many of us only undertake a few times in our lives. A Buyers Advocate or Buyers agent can assist for a variety of reasons including:

Getting your weekends back by applying our wise experience in finding your perfect home in Bundoora.We can help you purchase a home with confidence as we guide you through each step from selecting the home (access to off market listings), market appraisal, negotiate or bid at auctions.

The word Bundoora is derived from “Kelbundoora”, the name of a 19th-century Wurundjeri tribesman

Bundoora is located just 16kms north of the city where the greenery of Eltham is as reachable as the cafes of Preston.

Bundoora’s location and space make it a popular place for families, particularly older and more established ones, either with kids still at home (or uni) or without, while the various tertiary institutions draw a lot of young, independent people to the area too.

The suburb sports some interesting features to suit all locals. There’s the Bundoora Homestead Arts Centre, a historic house, art gallery and cafe, and Bundoora Park which has everything from a children’s farm to a golf course.

For all shopping needs Bundoora Square Shopping Centre on Plenty Road and Brand Junction are conveniently located in close proximity.

Buses and trams can take you all the way from Docklands to Bundoora.

Bundoora has plenty of spacious family homes, generally of a contemporary dream home style rather than a period one, and suitable for families with children who need a little space. More recently, extremely modern houses and townhouses are being developed in burgeoning estates in the area, as well as slick apartments both built and in development. 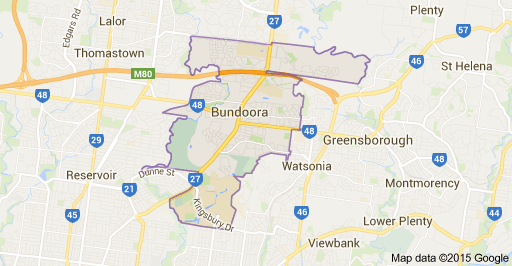 Thinking of selling your Bundoora home? Speak to a Vendor advocate first.