Buying a property in Reservoir can be a difficult process that many of us only undertake a few times in our lives.A Buyers Advocate or Buyers agent can assist for a variety of reasons including:

Getting your weekends back by applying our wise experience in finding your perfect home in Reservoir.

Reservoir is a northern charmer on the inner-city fringe, located 12km from the CBD. The suburb is experiencing unprecedented growth, with plenty of new developments, with no shortage of beautiful period houses, including Art Deco as well as classic Australian weatherboards, many with large gardens and spectacular interior renovations. There are also a number of 1960s of units and family homes on large blocks, alongside new estates of modern, geometric townhouses and units.

The demographic includes a mix of long-term resident families, but you’ll also find young, independent people catching on to Reservoir’s neat location as it is considered ‘still affordable’ inner-city lifestyle.

The Suburb offers a number of amenities including the Northland Shopping Centre, Preston Market, High Street Food Quarter, Sydney Rd shops and restaurants and one of three remaining drive-in cinemas in Melbourne, the Village in Coburg.

Convenience is within arm’s reach with four railway stations on the Mernda Railway line: Reservoir, Regent, Keon Park & Ruthven. The Victorian Government has announced that it will build a suburban rail loop, which will include a station at Reservoir.

There is also easy access to the Northern/Western Ring Rd, Hume Highway/Freeway, Tullamarine & Calder Freeways and the Eastern Freeway. 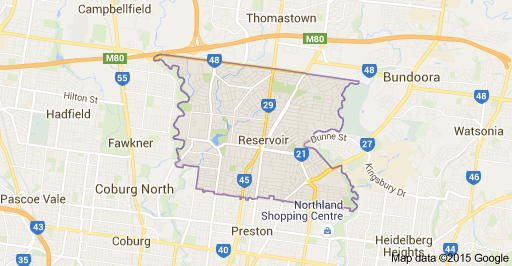 Thinking of selling your Reservoir home? Speak to a Vendor Advocate today.