Buying a property in Collingwood can be a difficult process that many of us only undertake a few times in our lives. A Buyers Advocate or Buyer’s agent can assist for a variety of reasons including:undesirable experiences with Real Estate Agents.

Getting your weekends back by applying our wise experience in finding your perfect home in Collingwood.

Melbourne’s earliest suburbs Collingwood and Fitzroy were first known as Newtown. In 1842, Newtown was renamed Collingwood, possibly after the Collingwood Hotel, which was named after the British admiral who succeeded Nelson at Trafalgar.

Collingwood is an inner-city suburb of Melbourne, 3km north-east of the CBD. It is one of the oldest suburbs in Melbourne and is bordered by Smith Street, Alexandra Parade, Hoddle Street and Victoria Parade.

The suburb’s housing consists of a large number of high-rise housing commission flats and a number of older single and double-storey former workers cottages on small subdivisions. More recently, older warehouses and factories have been converted into fashionable apartments and there have also been more modern townhouse developments.

Transport within Collingwood consists of mainly narrow one-way streets. Major tramlines include tram routes 109 and 86, with the Collingwood railway station located in the neighbouring suburb Abbotsford. 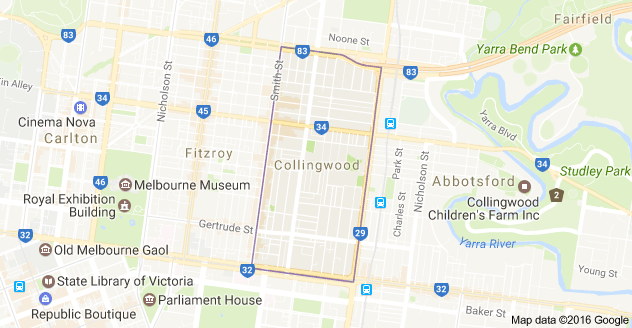